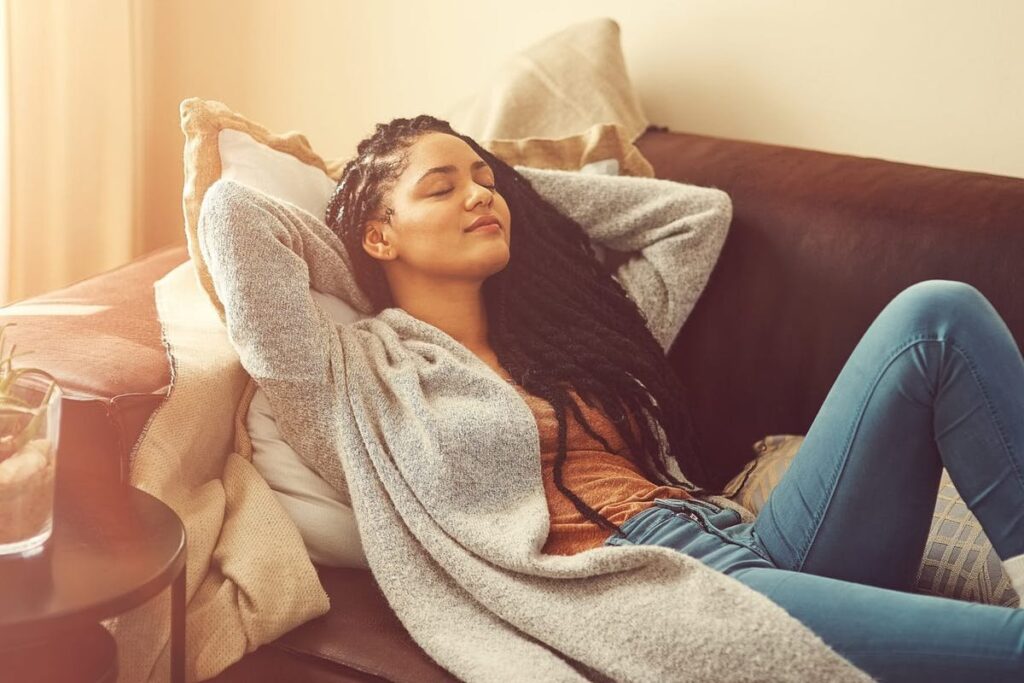 Evolution Didn’t Wire Us for Eight Hours of Sleep

On dry nights, the San hunter-gatherers of Namibia often sleep under the stars. They have no electric lights or new Netflix releases keeping them awake. Yet when they rise in the morning, they haven’t gotten any more hours of sleep than a typical Western city dweller who stayed up doomscrolling on their smartphone.

Research has shown that people in nonindustrial societies—the closest thing to the kind of setting our species evolved in—average less than seven hours a night, says David Samson, an evolutionary anthropologist at the University of Toronto, Mississauga. That’s a surprising number when you consider our closest animal relatives. Humans sleep less than any ape, monkey, or lemur that scientists have studied. Chimps sleep about nine and a half hours out of every 24. Cotton-top tamarins sleep about 13. Three-striped night monkeys are technically nocturnal, though, really, they’re hardly ever awake—they sleep for 17 hours a day.

Samson calls this discrepancy the human sleep paradox. “How is this possible, that we’re sleeping the least out of any primate?” he says. Sleep is known to be important for our memory, immune function, and other aspects of health. A predictive model of primate sleep based on factors such as body mass, brain size, and diet concluded that humans ought to sleep about nine and a half hours out of every 24, not seven. “Something weird is going on,” Samson says.

Research by Samson and others in primates and nonindustrial human populations has revealed the various ways that human sleep is unusual. We spend fewer hours asleep than our nearest relatives, and more of our night in the phase of sleep known as rapid eye movement, or REM. The reasons for our strange sleep habits are still up for debate but can likely be found in the story of how we became human.

Millions of years ago, our ancestors lived, and probably slept, in trees. Today’s chimpanzees and other great apes still sleep in temporary tree beds or platforms. They bend or break branches to create a bowl shape, which they may line with leafy twigs. (Apes such as gorillas sometimes also build beds on the ground.)

Our ancestors transitioned out of the trees to live on the ground, and at some point started sleeping there too. This meant giving up all the perks of arboreal sleep, including relative safety from predators such as lions.

Fossils of our ancestors don’t reveal how well-rested they were. So to learn about how ancient humans slept, anthropologists study the best proxy they have: contemporary nonindustrial societies.
Recommended Reading

A giant baby sleeps between a husband and wife.
Dear Therapist: My Husband and I Don’t Have Sex Anymore
Lori Gottlieb
A woman sunbathes next to the Seine river in Paris, France.
Frigid Offices Might Be Killing Women’s Productivity
Olga Khazan
photo of cracked bust of Lincoln on black background
How America Ends
Yoni Appelbaum

“It’s an amazing honor and opportunity to work with these communities,” says Samson, who has worked with the Hadza hunter-gatherers of Tanzania, as well as with various groups in Madagascar, Guatemala, and elsewhere. Study participants generally wear a device called an Actiwatch, which is similar to a Fitbit with an added light sensor, to record their sleep patterns.

Gandhi Yetish, a human evolutionary ecologist and anthropologist at UCLA, has also spent time with the Hadza, as well as the Tsimane in Bolivia and the San in Namibia. In a 2015 paper, he and other researchers assessed sleep across all three groups and found that it averaged between only 5.7 and 7.1 hours.

Humans, then, seem to have evolved to need less sleep than our primate relatives. Samson showed in a 2018 analysis that we did this by lopping off non-REM time. REM is the sleep phase most associated with vivid dreaming. That means we may spend a larger proportion of our night dreaming than primates do. We’re also flexible about when we get those hours of shut-eye.

To tie together the story of how human sleep evolved, Samson laid out what he calls his social-sleep hypothesis in the 2021 Annual Review of Anthropology. He thinks the evolution of human sleep is a story about safety—specifically, safety in numbers. Brief, flexibly timed REM-dense sleep likely evolved because of the threat of predation when humans began sleeping on the ground, Samson says. And he thinks that another key to sleeping safely on land was snoozing in a group.

“We should think of early human camps and bands as like a snail’s shell,” he says. Groups of humans may have shared simple shelters. A fire might have kept people warm and bugs away. Some group members could sleep while others kept watch.

“Within the safety of this social shell, you could come back and catch a nap at any time,” Samson imagines. (He and Yetish differ, however, on the prevalence of naps in today’s nonindustrial groups. Samson reports frequent napping among the Hadza and a population in Madagascar. Yetish says that, based on his own experiences in the field, napping is infrequent.)

Samson also thinks these sleep shells would have facilitated our ancient ancestors’ journey out of Africa and into colder climates. In this way, he sees sleep as a crucial subplot in the story of human evolution.

It makes sense that the threat of predators may have led humans to sleep less than tree-living primates, says Isabella Capellini, an evolutionary ecologist at Queen’s University Belfast, in Northern Ireland. In a 2008 study, she and her colleagues found that mammals at greater risk of predation sleep less, on average.

But Capellini isn’t sure that human sleep is as different from that of other primates as it seems. She points out that existing data about sleep in primates come from captive animals. “We still don’t know much about how animals sleep in the wild,” she says.

In a zoo or lab, animals might sleep less than is natural, because of stress. Or they might sleep more, Capellini says, “just because animals are that bored.” And the standard laboratory conditions—12 hours of light, 12 hours of dark—might not match what an animal experiences in nature throughout the year.

The neuroscientist Niels Rattenborg, who studies bird sleep at the Max Planck Institute for Ornithology, in Germany, agrees that Samson’s narrative about the evolution of human sleep is interesting. But, he says, “I think it depends a lot on whether we have measured sleep in other primates accurately.”

And there’s reason to suspect that we haven’t. In a 2008 study, Rattenborg and his colleagues attached EEG devices to three wild sloths and found that the animals slept about nine and a half hours a day. An earlier study of captive sloths, on the other hand, had recorded nearly 16 daily hours of sleep.

Having data from more wild animals would help sleep researchers. “But it’s technically challenging to do this,” Rattenborg says. “Although sloths were compliant with the procedure, I have a feeling primates would spend a lot of time trying to take the equipment off.”