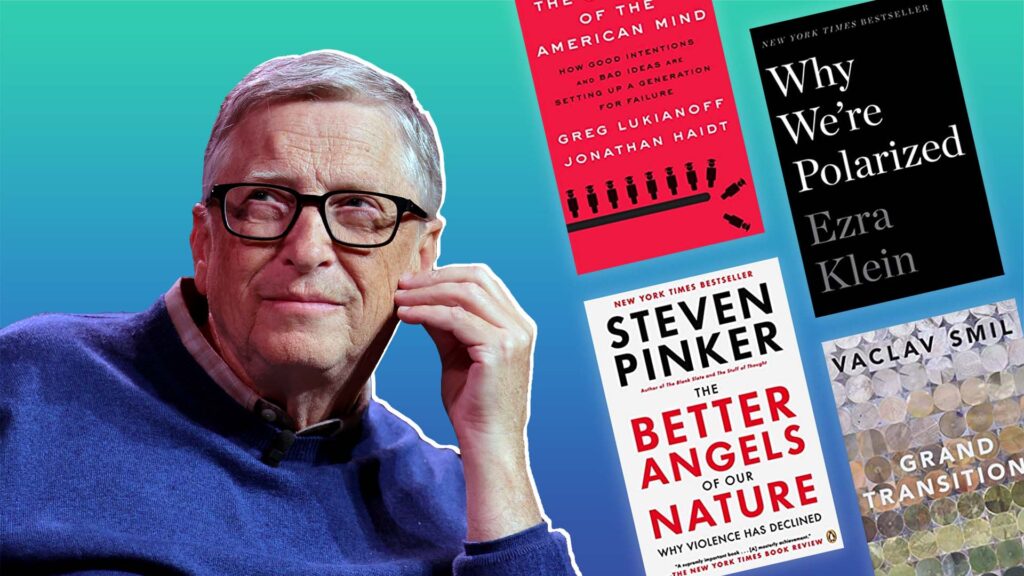 When asked what advice he had for young people who want to make a positive impact on this world as part of a recent Reddit AMA (ask me anything) recently, Bill Gates’s first suggestion was, “Read a lot.”

He’s certainly taken his own advice. The billionaire entrepreneur-turned-philanthropist and super reader is constantly doling out book recommendations on his blog.

Out of the dozens and dozens of titles he’s mentioned over the years, which are his absolute favorites? In the course of the AMA Gates answers that too, naming eight diverse titles that he considers among his top books of all time.
1. Grand Transitions by Vaclav Smil

When Gates reviewed this book back in 2019, he called it “masterpiece” from “one of my favorite thinkers.” While he cautioned the book is “not for everyone” and that “long sections read like a textbook or engineering manual,” he also insisted that Smil’s examination of the growth of just about everything, from dinosaurs to the number of transistors on a computer chip, is nothing short of brilliant. “Nobody sees the big picture with as wide an aperture as Vaclav Smil,” Gates concluded.
2. How the World Really Works by Vaclav Smil

Another title from the Czech-Canadian professor and Gates’s favorite author, this one is apparently a light read compared to Smil’s other more technical tomes. The book “represents the highly readable distillation of this lifetime of scholarship,” according to The Wall Street Journal. It offers readers an overview of exactly how our material world, from concrete to fertilizer, is made.
3. The Better Angels of Our Nature by Steven Pinker

“Steven Pinker’s The Better Angels of Our Nature: Why Violence Has Declined stands out as one of the most important books I’ve read–not just this year, but ever,” wrote Gates back in 2012. Apparently his opinion hasn’t changed in a decade.

Gates also had good things to say about Enlightenment Now, the follow-up book from the Harvard professor arguing that, despite appearances to the contrary, our world is not only growing less violent, but also more rational, prosperous, and all around better. If you’re looking for a ray of sunshine amid the current gloom, maybe pick up one of these titles.
4. The Coddling of the American Mind by Greg Lukianoff and Jonathan Haidt

In his AMA, Gates says he’s just finished this book by a First Amendment expert and social psychologist about the increasing unwillingness to engage with difficult ideas on college campuses, declaring it “good.” A lot of critics seem to have agreed.

The authors “do a great job of showing how ‘safetyism’ is cramping young minds. Students are treated like candles, which can be extinguished by a puff of wind,” wrote Edward Luce in the Financial Times, concluding, “their book is excellent. Liberal parents, in particular, should read it.”
5. Why We’re Polarized by Ezra Klein

“Reading Why We’re Polarized is like having a conversation with a brilliant, extremely persuasive friend who has read everything and who is armed with scores of studies that he’s able to distill into accessible bites,” claims Amy Chua in Foreign Affairs.
6. A Gentleman in Moscow by Amor Towles

Gates admits he reads a lot more nonfiction than fiction, but that doesn’t mean he isn’t profoundly moved by a novel now and again. In fact, he includes three on his best books ever list. In his 2019 review of this one about a Russian count sentenced to 30 years of house arrest in a hotel by the Bolsheviks, he confesses the novel brought him to tears.

“A Gentleman in Moscow is an amazing story because it manages to be a little bit of everything. There’s fantastical romance, politics, espionage, parenthood, and poetry,” he writes, suggesting it not just for students of Russian history but for everyone who likes a great story well told.
7. The Heart by Maylis de Kerangal

I have to confess I’m not entirely sure about this one, as Gates says only “Heart” is one of his favorites and there are a lot of books out there with the word “Heart” in the title. But I think it’s a fair bet that he’s referring to this novel about the untimely death of a young man and his family’s decision to donate his heart because Gates wrote a rave review about it several years back.

“It’s poetry disguised as a novel,” Gates said of the book at the time, noting, “At times I found myself reading more slowly than usual, simply because the way she describes things is so beautiful,” He adds that the book forced him to face the depth of the grief of parents who have lost a child he encounters in the course of his philanthropic work.
8. All the Light We Cannot See by Anthony Doerr

This Pulitzer-prize winning novel follows the story of a German soldier and a blind French girl whose lives collide during World War II. Critics used words like mesmerizing, exquisite, stunning, soulful, and hauntingly beautiful to describe it. Gates apparently also fell under the novel’s spell, as it was the last book on his list of all-time favorites.